In 2013 I first began noticing what was very clearly herbicide damage and death being caused in particular to two species of tree being Grewia occidentalis and Trema orientalis. I took photos of the affected trees but could not establish the source of or the herbicide that had caused the damage.

About a year after first observing the herbicide damage to trees and other plants I accidentally discovered the culprit herbicide.

I had removed a narrow band of bark down to the cambium on three trees on my property and carefully applied a very narrow band of Kaput Gel containing Triclopyr and Picloram in a band of about 50 mm on the bottom half of the area where the bark had been removed. Within a few days I noticed that two trees growing within a meters of one of the trees started to show signs of herbicide poisoning and within two weeks one of the small trees Hippobromus pauciflorus was completely dead, the second small tree affected was Obetia tenax which very nearly died but eventually after more than two years recovered. For up to three meters along the line of the main roots all dicotyledonous ground cover plants were affected. A wild grape Rhoicissus tomentosa growing about six meters from one of the other trees was also very badly affected clearly from herbicide leached from the tree that had been treated with Kaput gel, eventually over ninety percent of the very large vine died what is left at the time of writing being August 2017 has not completely recovered.

Since then I have kept a very close eye on where ever I have seen contractors spraying or applying herbicides. Time and again I have found that Herbicides containing Picloram have caused excessive amounts of damage and death to a number of species.

Research on the internet confirmed what I had recorded but also brought to light some alarming facts as to the danger of using Picloram in sensitive natural areas or near to them.

As a result of my own observations as well as what information I have obtained from the internet and a number of experts that  I have discussed the danger of applying Picloram with I will certainly never spray with any Herbicide containing Picloram in any natural area neither would I recommend any one else to do so.

I would go as far as to say do not under any circumstances ever spray with any herbicide containing Picloram in environmentally sensitive areas for instance in conservation areas or any other area when no damage to indigenous vegetation may occur. Also do not use herbicide gels containing Picloram and if there is absolutely no alternative then do so with extreme caution and only on plants that cannot be controlled with other herbicides because as reported above picloram leaches from the roots from the roots of plants that have been treated with it killing or damaging desirable plants growing nearby.

There is no need at all to use Picloram in natural areas because there are herbicides that are just as effective and are far safer to use so please do not use this nasty herbicide in these areas.

The following information in regards to picloram has been published on the internet.

Picloram is a systemic herbicide that belongs to the pyridine family of compounds, used for general woody plant control. It also controls a wide range of broad- leaved weeds excepting mustards (crucifers). Most grasses are resistant to picloram so it is used in grassland management programs.

Picloram can be sprayed onto foliage, injected into plants, applied to cut surfaces, or placed at the base of the plant where it will leach to the roots. Once absorbed by the foliage, stem, or roots, picloram is transported throughout the plant.

Picloram is the most persistent member of its family of herbicides which does not bind strongly with soil particles and is not degraded rapidly in the environment, allowing it to be highly mobile and persistent. The half-life of picloram in soils can range from one month to several years.

As a result Picloram can move off-site through surface or subsurface runoff and has been found in the groundwater. Picloram may also “leak” out of the roots of treated plants, and be taken up by nearby, desirable species.

Concentrations in runoff reported by researchers are often adequate to prevent the growth of non-target terrestrial and aquatic plants, and therefore, picloram should not be applied near water.

Picloram is a dicot-selective, persistent herbicide used to control a variety of annual and perennial broadleaved herbs and woody species. It can persist in an active form in the soil from several months to years, and can also be released from the roots of treated plants into the soil, where other non-target species may take it up and be injured or killed (Hickman et al. 1989). The cut-stump treatment is typically used to control woody species. Picloram is metabolized slowly by microbes and can be degraded through photolysis when directly exposed to sunlight. The half-life of picloram in soils can vary from one month to three years depending on soil and climate conditions. Other methods of chemical degradation do not occur readily. Picloram does not bind strongly with soils and can be highly mobile, moving to soil depths of two meters and laterally to one km.

Soils
Picloram is not readily degraded in soils and can be persistent and mobile. Estimates of the persistence of potentially toxic concentrations vary from a few months to three years, depending on soil and environmental conditions (Scrifres et al. 1972; Fryer et al. 1979; Johnsen 1980; Norris et al. 1982; Neary et al. 1985; Smith et al. 1988; Bovey & Richardson 1991; Close et al.1998). In soils where picloram persists for long periods of time, it has high potential to move vertically and horizontally, which can lead to contamination of water sources and non-target (terrestrial and aquatic) sites. Smith et al. (1988) reported that one and two years after treating a site with 3.38 kg/ha of picloram, residues were found in the soils and groundwater of an untreated site one km away.

Water
Because picloram is water-soluble and does not bind strongly to soil, it is capable of moving into local waterways through surface and subsurface runoff (Michael et al. 1989). The extent to which picloram enters a waterway depends largely on the type of soil, rates of application, rainfall received post-application, and distance from point of application to nearest water body or groundwater (Trichell et al. 1968; Baur et al. 1972; Mayeux et al. 1984). In general, the larger the buffer between treated sites and surface water bodies or groundwater, the smaller the potential for water contamination

Vegetation
In non-susceptible species such as grasses, picloram is metabolized rapidly, while in susceptible species, picloram can remain intact for extended periods (WSSA 1994). When applied to soil, picloram is readily absorbed by plant roots. When applied to foliage, the majority of picloram (70-90%) remains in the leaves and only a small percentage is conducted to stems and roots (Meikle et al. 1966; Cessna et al. 1989; Hickman et al. 1990). Unabsorbed picloram remaining on leaf surfaces may photo degrade in sunlight or be washed off with rainfall or irrigation. Picloram absorbed by plants can be released into the soil by passive transport through the roots and then taken up by roots of other nearby plants (Hickman et al. 1990). Therefore, even selective application of picloram to specific target plants could potentially harm nearby desirable
plants.

Picloram is found in various herbicide mixes in South Africa under the following names
Plenum - Active Ingredients: Picloram (80g/l), Fluroxypyr (80g/l)
GLADIATOR 160 ME – Active ingredients: Fluroxypyr 80 g/l, Picloram 80 g/l
There could be others

Most kindly written for me for publication by Ecoman Michael Hickman on 20.08.2017

In 2013 I first began noticing what was very clearly herbicide damage and death being caused in particular to two species of tree being Gre... 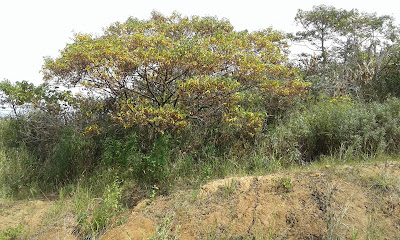